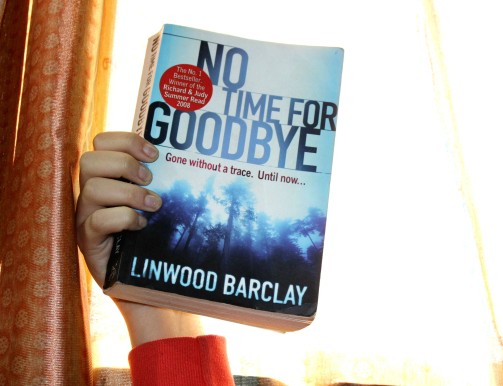 Combine hysterical dysfunctional families with murder and reality shows and you get ‘No Time for Goodbye’- an intense and captivating mystery thriller by ‘Linwood Barclay’ that will leave you shell shocked to the core. I gave it 4 out of 5 stars!

What is it about? I’m glad you asked….

Fourteen-year-old Cynthia Bigge woke one morning to discover that her entire family, mother, father, brother had vanished. No note, no trace, no return. Ever. Now, twenty-five years later, she’ll learn the devastating truth

Cynthia is happily married with a young daughter, a new family. But the story of her old family isn’t over. A strange car in the neighborhood, untraceable phone calls, ominous gifts, someone has returned to her hometown to finish what was started twenty-five years ago. And no one’s innocence is guaranteed, not even her own. By the time Cynthia discovers her killer’s shocking identity, it will again be too late . . . even for goodbye.

‘No Time for Goodbye’ is an intense and captivating thriller by ‘Linwood Barclay’ that no reader can keep aside before they reach the end. It is one of those mysteries that promise to keep you up all night, driven by the mere urge to find out what comes next.

There are many reasons as to why one picks up a book but in this case I chose ‘No Time for Goodbye’ because of its intriguing and mysterious title. It immediately made me think of why there was no time to say goodbye and who are we saying goodbye too which immediately made me want to read the summary and before I knew it I had purchased it.

See, that’s the magic of a great title

I can assure you that this book is filled with numerous breathtaking plot twists that had me gasping out loud at odd hours. This is what makes it an absolute page turner-just when you think you have figured it all out; Linwood bombards you with yet another one of his fantastic plot twists, leaving you right where you had started.

The narrator- Terry Archer has a dry sense of humor which is a brilliant touch to this book. ‘No Time for Goodbye’ is full of diverse and interesting characters like Jane- a troubled student with a flair for writing, Vince Fleming- a shady criminal and Cynthia’s old boyfriend and little Grace- Cynthia and Terry’s 8 year old daughter who has a habit of analyzing the night sky through her telescope to make sure that no meteors crash upon her family. Yup, that’s definitely an interesting lot which clicked into the story seemingly perfectly.

Al There is nothing more annoying than finishing a perfectly wonderful book and realizing that many of your questions have gone unanswered. What happened to the protagonist’s aunt? Did that banker commit suicide or not and why did we have that little flashback if its purpose was not explained properly? But I was very happy to find that ‘No Time for Goodbye’ was an exception to this as there were no loose ends left behind and Linwood Barclay had wrapped up every end nicely and cleared all the bits and pieces

My favorite part of this book was the letter that Linwood introduced in the very end of the book. After 14 years of wondering what had happened to her family that fatal night, Cynthia finally gets her answers along with a letter from her mother. This letter perfectly portrays the bond of a mother and daughter and pulls the strings of the reader’s heart. You might need tissues for this

While the book is centered around the fiery haired Cynthia we have little knowledge about her perspective on the series of events that take place. An accurate and detailed portrayal of Cynthia’s angst, insecurities and the pain behind her facade would have bought something entirely sumptuous to the table.

While the ending scenes were satiating and brought about every piece of the puzzle together, some may have found them a tad bit dramatic. We all love a little bit of drama in our lives but that was stretching it a little too far. Keep it simple!

It’s rather difficult to explain this particular problem without giving any spoilers but Terry-the protagonist’s best friend- had a role that didn’t quite seem to fit. Nearing the end, Linwood reveals an astonishing trait of Terry’s best friend that I found difficult to digest. It seemed rather forced and didn’t really match that particular character’s backstory- long story short, it was completely unnecessary.

So, overall I would say this was an epic and engaging read and basically everyone on this planet(and Mars too) should go read it immediately! 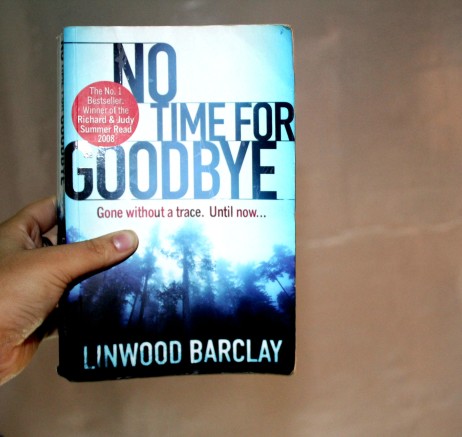 Have you ever read this book? What are your thoughts on this book after reading my review? Have you ever heard about this author or book? Tell me in the comments below!

One thought on “No Time for Goodbye: Book Review”

Follow Not Just Fiction on WordPress.com
Join 2,628 other subscribers