Hello everyone! I hope you all are staying safe and are doing as well as you can under these circumstances. Hopefully, this post will bring a smile to your face, because for this month’s Read the Rainbow discussion post, we have a fluffy and cute read for you 🙂

Read the Rainbow is a spotlight for queer books, authors and readers. Every month, I’ll be hosting an interview or discussion centred around a queer book. The interviews will be conducted with authors and the discussions will take place with #ownvoice readers for each book. Every month, I’ll be announcing the book of the month for Read the Rainbow so that everyone can read the book before the spotlight, although it is not a necessity.

Today we have my lovely friend Iris(she/her) on the blog to discuss Only Mostly Devastated by Sophie Gonzales. This book features gay and bisexual characters.

Here’s a short blurb if you’ve never heard of the book before. 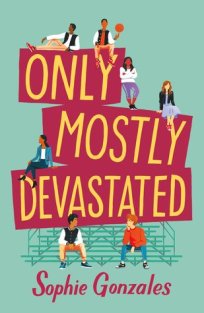 Will Tavares is the dream summer fling―he’s fun, affectionate, kind―but just when Ollie thinks he’s found his Happily Ever After, summer vacation ends and Will stops texting Ollie back. Now Ollie is one prince short of his fairy tale ending, and to complicate the fairy tale further, a family emergency sees Ollie uprooted and enrolled at a new school across the country. Which he minds a little less when he realizes it’s the same school Will goes to…except Ollie finds that the sweet, comfortably queer guy he knew from summer isn’t the same one attending Collinswood High. This Will is a class clown, closeted―and, to be honest, a bit of a jerk.

Ollie has no intention of pining after a guy who clearly isn’t ready for a relationship, especially since this new, bro-y jock version of Will seems to go from hot to cold every other week. But then Will starts “coincidentally” popping up in every area of Ollie’s life, from music class to the lunch table, and Ollie finds his resolve weakening.
The last time he gave Will his heart, Will handed it back to him trampled and battered. Ollie would have to be an idiot to trust him with it again.

Iris is a book blogger at Hoard of Books and identifies as an asexual lesbian. Despite her shyness, she loves acting and public speaking or anything that will get her onstage. Her favourite books include Simon vs the Homo Sapiens Agenda, Heartstopper series and the Six of Crow series among a few.

Saimon is a bookstagrammer, booktuber and a certified disaster bisexual. He loves reading about soft queer bois and murdery dark academia cliques and is usually seen raving about the most mundane things on his insta. His favorite books include Simon Vs The Homo Sapiens Agenda, If We Were Villains, Delayed Rays Of A Star AND MORE

As per usual the discussion remains spoiler-free.

1. Just from reading the blurb and looking at the cover what were your thoughts or expectations from this book? Did your expectations hold?

IRIS: I was expecting a light fluffy Grease retelling with lots of angst and drama and I was . . . mostly right? I definitely didn’t realize how much it would deal with grief, so that was a surprise, but otherwise it was exactly what I was expecting.

SAI: I obviously expected a lotta angst and a lotta cuteness – I feel like there was less angst than what I expected – which is not necessarily a bad thing, but I still wish I’d had more of that angst so I could’ve enjoyed the sweet moments, even more, when it happened!
2. Which of the main characters did you relate more to and which side characters were your favourite?

IRIS: I definitely related more to Ollie. Actually, I related like . . . scarily much to Ollie. There were so many oddly specific details that made me just go like “wow this is me”, and also I loved his sass and snark. Whereas Will . . . I love Will. Will is my son. But Will is also a huge jerk, and I would like to hope that I am not a huge jerk.

As for side characters . . . honestly I loved Lara. Now don’t get me wrong, Lara is also a huge jerk. But her character was so well developed and honestly left me in awe a bit. Lara is the Rizzo of the book, and as such, like Rizzo, is automatically the most interesting.

SAI: I loved Ollie. I think Queer YA has come far from just having coming out stories (they’re still essential), but yeah, it’s just nice to see Ollie simply be queer. I think I liked and related to that part a lot. I am probably not explaining it right, but it meant something.

My favorite side character was Lara! She’s a meanie, but she was a softie inside and needs to be protected at all costs.

3. Describe the overall vibe of the book in three words.

4. Without giving any spoilers, tell us about your favourite parts or themes in the book!

IRIS: I think my favourite part was probably the humour. This book had me in stitches, I was laughing so hard at times. Like omg it was SO funny. There was a lot of banter that was just amazing, and also Ollie was a sassy bean and I loved his narration.

SAI: I feel like I’m about to repeat similar answers to this question and the next, but one of the things in this book that I really appreciated was the focus on ‘passing-homophobia’ that people around us exhibit often. The kind filled with subtle jabs and centers around the way we speak about queer people in general. Cause when someone is an extreme homophobe, we can cut them off. But what if your friends just happen to make cursory harmful remarks about queer people in the name of ‘jokes’? What if your family enforce stereotypical gender norms on kids cause they want boys to be Boys™? And I liked that the author addressed those kinds of instances. That touched me.

5. What are your views on the LGBTQ+representation? Did Sophie Gonzales add something to the queer narrative you hadn’t seen before?

IRIS: I didn’t find the leads to be particularly revolutionary in terms of queer rep, personally. It was good rep, and I appreciated the discussions it had on a lot of issues, such as being closeted and such, but it was all stuff I’d seen before in some way or another.

However I absolutely loved Lara’s journey with her sexuality. It was messy in a way we don’t often see, and I really appreciated it. She was so far from perfect, and the way she handled things was often . . . not great. But she was so real, and I loved seeing her messy edges.

SAI: I have no complaints about the representation. It is very important to see the POC coming out experience, at least for me, cause POC family dynamics are vastly different, and the additional layer of sexuality is something I long to see and I liked how Gonzales went about it in this book. It wasn’t about the extremely homophobic people in the world, but rather addressed the microaggressive sort of homophobia we witness in our circles. I liked to see it acknowledged and addressed!

6. Did you relate to Will as he came to terms with his sexuality and the idea of being out or was it a bit different for you?

IRIS: Not really tbh. I was never anywhere near as closeted as Will was. I grew up in a much more liberal place (more like Ollie) and the hardest part about coming out to me was always just figuring out how to say it. I think his journey with it was very real, and I empathized with him a lot, but I didn’t relate.

SAI: I wouldn’t say I related, but I think the whole coming out thing can be a big mess, especially for a person of color – and I liked that. I would’ve liked seeing all this from Will’s side too, but we only had Ollie’s perspective. Regarding my own experience, it’s like Ollie’s after the move here – if anyone asks I’ll let them know and I make sure to talk about it in general – but that’s all.

7. If you could make the decision to have Only Mostly Devastated adapted as a movie, tv show or anime, which would you choose and why?

IRIS: Very much a movie. The fact is, this book is based off of a classic rom-com movie, and I would absolutely love to see it as a movie that represented that fact. I think it could be so well done in a way that both pays tribute to Grease and represents the much more modern reality that is Only Mostly Devastated.

SAI: I’d love it if it were a movie – maybe even a musical movie like Grease itself. I can already sense that it would be a bop! West Side Story meets Grease with a queer cast! Where do I sign up for tickets?!! I feel like a tv show would be to stretched out for a quick book like this. And I just cannot imagine it as an anime.

8. Lastly, if you were to write a short letter to either this book or the author, what would you write?

No one should ever let me write to authors, basically

SAI: Hmmm, I enjoyed the book but I wouldn’t say I enjoyed it A LOT A LOT – you get what I mean? I don’t feel like writing the book a letter, to say the least. BUT I’d love to appreciate the author and thank her for writing this story! Will’s story is important and I’m glad I got to read about Ollie and Will!

Thank you Iris and Sai for such a wonderful discussion!

I hope you all enjoyed the Read the Rainbow discussion for this month 🙂 Before you go, I would like to announce our next book of the month: The Subtweet by Vivek Shraya which features a transgender main character. Feel free to read along and join us next month! Here’s a little blurb so that you can get to know more about The Subtweet. 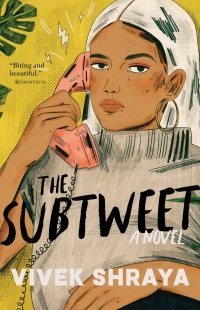 Everyone talks about falling in love, but falling in friendship can be just as captivating. When Neela Devaki’s song is covered by internet-famous artist Rukmini, the two musicians meet and a transformative friendship begins. But as Rukmini’s star rises and Neela’s stagnates, jealousy and self-doubt creep in. With a single tweet, their friendship implodes, one career is destroyed, and the two women find themselves at the center of an internet firestorm.

Celebrated multidisciplinary artist Vivek Shraya’s second novel is a stirring examination of making art in the modern era, a love letter to brown women, an authentic glimpse into the music industry, and a nuanced exploration of the promise and peril of being seen

Have you read Only Mostly Devastated? If yes, what are your thoughts on it? If not, is it on your TBR?

Do you prefer reading books about characters coming out or subtler queer nuances? It’s fine to have a preference as long as you support all kinds of queer literature 🙂

Tell me about some books with gay representation that you would like to recommend!

One thought on “Read the Rainbow Spotlight: Only Mostly Devastated”

Follow Not Just Fiction on WordPress.com
Join 2,663 other followers